Pelley Family History
The following has been excerpted from Dr. Seary's Family Names of the Island of Newfoundland, Memorial University of Newfoundland, 1977.
PELL(E)Y In Newfoundland: Notes:
1. DPHW: DPHW volumes of the "Black Books" are now known as the registers of Vital Statistics.
From Genealogical Sources at PANL . Provincial Archives of Newfoundland and Labrador (http://www.tcr.gov.nl.ca/panl/gen_src.html):
Civil Registration started in Newfoundland and Labrador in 1891. Beginning at that time, all clergy were required to register with the government, every baptisms, marriage and burial conducted within their jurisdiction. Prior to 1891, no such central registry existed, so the only record of baptism, marriage or burial was the one held by the church.

During the Commission of Government in the 1930's and 1940's, Sir John Charles Puddester was the Commissioner of the Department of Public Health and Welfare. In the early 1940's, Sir John was apparently disturbed by the fact that the original parish registers held by some churches were in a fragile condition and that the records of some other churches had already been lost through fire.

To prevent any further loss of records and so that the government could have some record of vital statistics prior to the start of the 1891 system of registration, he initiated a program to have churches transcribe these pre 1891 records. The Department of Public Health and Welfare offered ten cents a name as compensation for those clergy who arranged for the transcription of the baptism and marriage records of their parishes. Burial records were not requested, although a few churches did submit a number of these records.

These volumes which came to be referred to as the DPHW volumes of the "Black Books" are now known as the registers of Vital Statistics.

So far, I just have two items - my grandfather's (Frederick George Pelley) World War I discharge paper and what appears to be part of the Victory Medal(Inter-Allied War Medal). As many of you know, the country of Newfoundland sent its young men, many never to return or to return not whole, to serve King and Empire. The Newfoundland Regiment, later to be given the right to append "Royal" to the name by King George V, began to be formed just days after the announcement of war. Here is a short note on what the Battle of Beaumont-Hamel did to the regiment: Beaumont-Hamel. It seems my grandfather was fortunate to be discharged in April 1916, else the history may have been different. 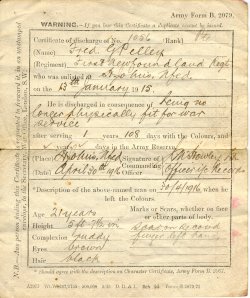 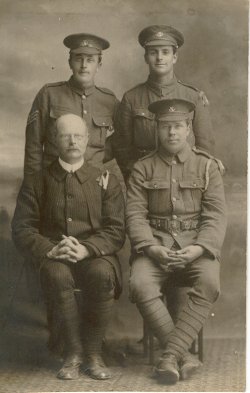 My Grandfather, Frederick George Pelley,
is the fellow on the top-right.
He is about 20 years old.
If you have any additional information on the othe three gentlemen please contact me at
webmaster@pelleys.com
Questions or comments? Drop a line to the Webmaster